My computer has been getting slower and slower over time. It’s been freezing and stuttering during use, and last weekend I decided enough is enough. I sat down with my Windows 10 computer and began erasing programs, turning off tasks and looking for different ways to speed up my system. After going through several tutorials and changing about a dozen different settings around I decided to go through my services tab and start shutting off services that I don’t need. While searching through the services I noticed one that I wasn’t familiar with, the Alljoyn Router Service.

At first, I thought that maybe it was some form of a virus that was slowing my computer down, and I did a bunch of research on it. After a good bit of reading and researching, I found out all about the service, and I was happy to learn that it’s not dangerous at all and that it’s standard with Windows 10 systems. That doesn’t mean that I needed to leave it running through, and in fact, I decided to shut it off. If you’re looking for ways to improve your computer performance, it’s important to learn about the different services and what you can turn off to boost speed. Below I’ll explain all about the Alljoyn service and why you might not need to keep running it at all. Of course, everyone’s situation is different, so read on to double check if it’s something you’ll want to use in the future or not.

<< Amazon deal of the day: Noise-canceling, Waterproof HeadPhone at on sale for less than $20 >>

What is the Windows Service?

One of the first things that you need to know if you want to make your computer run as effectively as possible is what Windows services are and what their purpose is. These services are basically programs that run in the background. They are programs that run without showing you any indicators that they are running. The programs all have small jobs like enabling your computer to print out documents or allowing your computer to connect to a nearby wireless network by using your built-in wireless card.

There are dozens of different services, some come with Windows 10, and others are added to your computer as you download additional software programs. The services all run in the background and your system would lose key capabilities if you shut any of those services off. Now that you know how services in general work, it’s time to focus on one service in particular, the Alljoyn Router service. Few people know much about the service or what its purpose is, but we came up with answers with some research.

After plenty of research, we learned that the Alljoyn Router service is a built-in program that all Windows 10 systems come with now. This piece of software is open source, which means that anyone can see the code it’s made from and everyone is free to edit the software as well.

The service is a project from the AllSeen Alliance and it’s a sort of communication bridge for Windows 10 systems and Internet of Things products. If you aren’t sure what the Internet of Things is, we’ll explain it in more depth down below, but some people will already begin to see how the service might be expendable.

The service starts up with your system and it remains running all the time on most systems. While it’s up and running your computer is able to communicate with many more devices than it would be able to without the service. Whether that matters to you or not really depends on how you feel about the Internet of Things and smart devices though.

What is the Internet of Things?

In short, the IoT is just an interconnected network of smart devices throughout a space. Today you can purchase smart toasters, vacuums, refrigerators, television sets, cameras, thermostats, light bulbs and much more. These devices use different operating systems and connection methods than what your Windows 10 computer uses. Internet of Things devices enables you to check up on the status of more devices around your home and to take control of these different products as well. You can easily make yourself a cup of coffee, dim the lights throughout your house, adjust your home’s temperature and even shut the blinds around your house with the simple press of a button, or a computer command thanks to these smart devices and how they work. That’s an exciting thing, and also a demonstration of the power of that technology.

Should You Leave the Alljoyn Service Running?

Now that you know what the Alljoyn router service is, and what purpose it has, you can decide whether or not you want to leave it running on your system. If you have a bunch of smart devices throughout your home, and you want to be able to connect to them with your computer, it makes sense to leave the service running.

If you aren’t interested in communicating with the Internet of Things devices in your home, the service likely isn’t doing anything for you at all. Even if you do have many of those smart devices in your home, it doesn’t necessarily mean that you should leave the service running either. Many people never utilize their computers to talk with these devices, and instead, use mobile devices to take on that task instead and act as a sort of control hub for the home.

What are the Benefits and Drawbacks of the Service?

There are some very real benefits to disabling the Alljoyn router service, and the most prominent one is freeing up resources on your system that can be used for something else instead. The service itself doesn’t take up too much in terms of resources though, so the performance improvements should be minimal for most systems except those that are really outdated or overworked.

The only drawback to disabling the service is losing the ability to connect with many Internet of Things devices. These devices communicate through connection types like RFID, NFC, WiFi, LPWAN and others. If you’re interested in trying to get information from or to manipulate these devices with your Windows 10 machine right now, you should just leave the service running. If that’s not something you are interested in doing it makes sense to disable the service.

Will Disabling the Software Have a Real Impact on Your System?

After getting to know what the service is designed for and what it can do for you and whether or not you need the service, it’s important to consider what you have to gain by shutting it off and if the changes are worth the effort. Most modern-day computers have high-powered processors and lots of RAM to work with.

These systems usually aren’t maxing out their performance very frequently, even when doing something like playing a modern video game. If that’s how your current computer is, closing the service likely won’t make your system feel any different when you use it. If your computer is struggling to run programs and it’s overloaded, it might be a good candidate for shutting off the software specifically. The difference after removing the software should show with this sort of computer, and it’s a simple enough task to be worth the slight benefits that disabling it will offer you.

How to Disable the Alljoyn Router Service:

• Press Windows + R to activate the Run box and then input services.msc in the box. Then hit OK to move on. 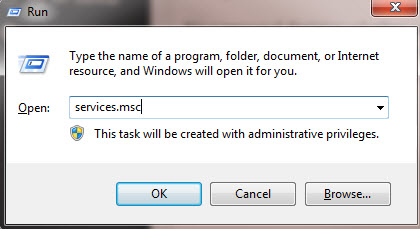 • If AJRouter running,  choose “Stop” to stop the service and select “Disabled” for startup type. 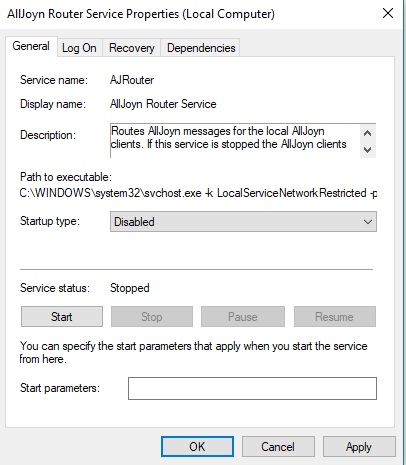 That’s all there is to turn off the service. As long as you are willing to follow along with the supplied steps you can cancel the service, get back the resources and use your computer with just a bit more power available from then on.

It’s a personal decision whether or not you want to leave the Alljoyn service running on your computer. It’s a pretty useful service for some people, but most won’t have any use for it. Decide if it’s useful for you and if not just turn the service off. After all, if a time comes when you want to make use of the service in the future, you can follow the same steps outlined above to turn the service on instead of off. It’s simple to do either way.

link to Can I Use WiFi Extender With Cox Panoramic Router?

High-speed internet at home is a must-have in the technological age. Just as important, however, is high-range internet, meaning internet that covers all parts of your home. To avoid internet dead...

Woman hand plugging a blue network cable into socket of a white Wi-Fi wireless router on a white wooden table. Wlan router with connected internet cables on a table in a home or office. Rear...